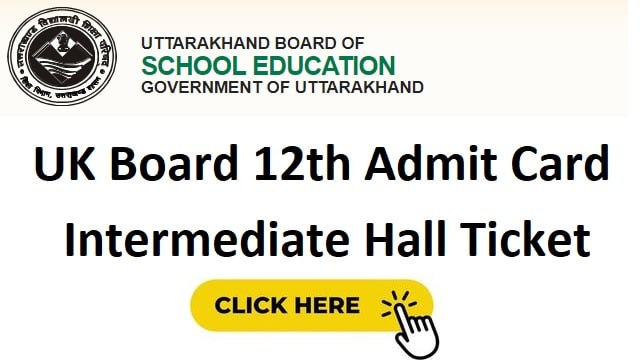 UK Board 12th Admit Card 2023 for final examinations is expected to be out soon on the official website of Uttarakhand Board of Secondary Education. The candidates can download admit card from the official website ubse.uk.gov.in before the examinations. The Admit card will be on-site just a month before the exams. Candidates will have access to their admit card online by February 2023, as the schools will get the same. Then it would be downloaded by the school officials to be given to the students for the examination.

The students are now eagerly waiting for UK Board 12th Admit Card 2023 to be out so that they get to know more about the study. However, it should be noted that the admit card would be issued to the schools virtually. The schools would then have to complete some details and hand the admit card to the students. It should also be noted that the Admit card are to be downloaded from the official website only for all the relevant information.

The examination dates for UK Board Class 12th have been released on the official website. It has been confirmed that the exams will begin in March 2023 and end in April 2023. The admit card would be available just a month or three weeks before the examinations start.

The exams for UK Board Class 12th will be subjective. English and Hindi exams will be of 100 marks each. The mathematics examination would be 80 marks, and 20 effects would be taken from the Internal assessments. On the other hand, Physics, Chemistry, and Biology exams will be 70 marks each, and 30 marks will be for Practical.